Meisje  Loos is a dynamic contemporary presentation where modern and urban dance, Baroque and hip hop music alternate.
A poetic and exciting love story in a beautiful decor and beautiful costumes, strong performers make Meisje Loos to an attractive and engaging presentation for a wide audience.

Meisje Loos goes up as sailor the big sea. her fear to be recognised as girl make her trip everything but easy. By the magnetic attraction of the sailor and the banter of the captain makes it a quest towards adulthood. Is her inescapable unmasking her fatal?

The presentation follows broadly the events in the song there was a girl loos osition. Where the girl is unmasked, penalty and there is an association in the love.
Of course, a story with unexpected events and references to the current time.
Meisje Loos is in addition to an exciting and beautiful love story, above all, a moving and contemporary performance with the necessary comic moments. 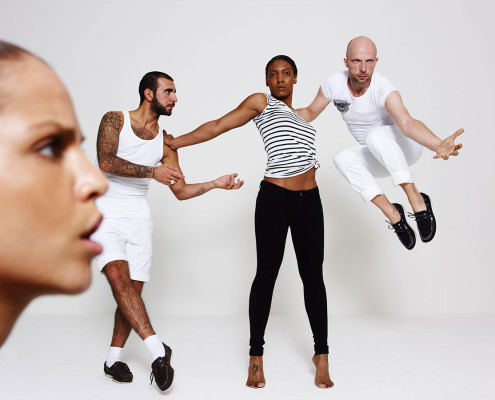 Background Meisje Loos
How ‘ the feminine appearance and behaviour relates to the role of the man ‘ and ‘ the search for a own identity ‘ are the main themes of Girl Loos.
Especially young women adapt their appearance to the expectations of men. Nowadays, there is a large group of girls who behaves and dresses as lust object in video clips. On the other hand, clog girls in certain circles to give their sexuality to no offense, one of the motives of Muslim girls to wear a veil. In Girl Loos is via transvestiviteit or crossdressing played with identity. Susanne Marx approaches the theme as a timeless, and not tied to a specific culture or age phenomenon.

The choreography
Choreographer Susanne Marx is like no other in State movements to give a clear emotional charge, so that an authentic, simple and readable version.
Departure point in the development of the choreography of Girl Loos are male and female stereotype movements and postures. The fusion of the sailor and the girl in the love and the final arrival into adulthood in the dance a mixture of modern dance and hip hop/street dance. In her previous successful presentation has Enthralled the urban dance style the performative force Susanne proven to give a presentation to the public and the needs to fascinating story.

The raps
In the raps are the motives of the girl, the confusion of the sailor, the two fight of the captain and the theme as expressed by a choir. Rosa Ana writes together with Susanne Marx texts which the public the historical context, the backgrounds and clarify the acts on the scene. Also the personal story of you standing in a male-dominated scene comes in the direct raps of rapster Rosa Ana reflected. Ana Rosa that if female rapper its raison d ‘ être must fight doesn’t seem more of this time. As a boy dress shows one of the ways to be accepted.
Journalist Mirjam van Biemen has by taking a series of interviews on this subject with people of different cultural background and age stories collected. These stories are in the version processed.

Music, Costumes and Decor
Starting point for developing the music, like in the choreography, is the mixing of different styles, such as classic Baroque music with hip hop and rap. Gary Shepherd works with the latest developments in the hiphop and confronts this with classic Baroque music, making an authentic and contemporary sound carpet. Max Ehrhardt plays Baroque harp.
Wojciech Dziedzic is the costume designer for the Nederlandse Opera and Toneelgroep Amsterdam. His inspiration for his dramatic costumes he retrieves from the drag queens world, where transvestivity or crossdressing plays a large role. For the scene appearance and costumes Meisje Loos determines and symbolizes the quest of a young adult to an own identity.

Educational offerings for theatres
At the presentation will hear a choice menu with proposals for an educational edge program.
In addition to substantive information about the performance and the theme in the form of a lesson scheme be offered dance workshops. These workshops are given by Susanne Marx with dancer in schools or in the Gulum Caggie theatres. In this workshop, the theatrical expressiveness of different dance styles and movements. Maximum number of participants per workshop is ca. 25 persons, duration one or two hours. (Available upon request.)

Meisje Loos is a co-production of VET and Podium Mozaiek and is supported by Fonds Podiumkunsten, Amsterdams Fonds voor de Kunst, VSB Fonds and the SNS Reaal Fonds.